How Can Art Therapy Help You Battle Depression? | Guest Post by Jane Sandwood 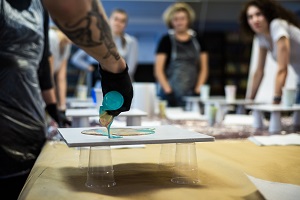 An estimated 16.2 million adults have depression – a mental condition that is also rising in numbers among teens. A Pew Research Center analysis found that around 3.2 million teens aged 12 to 17 faced at least one major episode of depression in the previous year, with one in five teenage girls being affected (compared to 7% of teenage boys). If you have depression, then seeking professional help is key. ‘Gold standard’ therapies such as cognitive behavioral therapy can be a big aid, as can holistic therapies such as mindfulness meditation and yoga. Art therapy, undertaken with the help of a trained art therapist, is also delivering promising results. If you are keen on discovering how creativity can help you battle the blues, read on.

A study undertaken by scientists at the University of Gothenburg sought to discover the extent to which art therapy could help those battling severe depression. The study showed that after just 10 treatments, those who had severe or moderately severe depression showed significant improvement. The study followed 43 people who underwent art therapy, as well as a control group of 36 people who had the same condition. Each session involved a short relaxation exercise, followed by creative work using crayons and watercolors. Lead researcher, Christina Blomdahl, stated that participants were invited “to doodle and feel free to express themselves the way they wanted to… then, they would talk about the picture and its significance.” The efficiency of art therapy, researchers found, was its ability to make people feel “like they were meeting themselves.” Artistic creations were like a mirror which enabled people to understand themselves better and make new discoveries.

Stress can be a trigger for depression, so one important target for those with this condition involves tackling stress proactively on a daily basis. Art can help with that, with one study by Drexel University researchers showing that simply using coloring books can reduce stress. So can taking time out to draw simple everyday shapes such as plants, still life compositions, and one’s pets. There are a plethora of online tools for sketching dogs, cats, and other pets. From sketching a cute cartoon or drawing a caricature of an animal, taking the time to put pencil to paper and adding selected colors is a mindful activity that can help to reduce worry and anxiety. The Drexel University did show that official art therapy is more potent than art as a hobby, but those who are already engaged in other therapies can benefit from additionally taking up drawing and painting as a hobby in their spare time.

Art Heals At Any Skill Level

If you have always struggled with perspective, proportion, and other key aspects of art creation, don’t let it get you down. A 2016 study published in the journal Art Therapy found that skill doesn’t matter when it comes to benefitting from art. When it comes to reducing stress, all creators benefit equally. The researchers measured levels of stress hormone, cortisol, in 39 adults (aged 18 to 59), who took part in 45 minutes of art creation. During the session, participants were allowed to use any materials they wished, and were invited to create any work of art they fancied. An art therapist was present to lend help if requested. They found that 85% of participants showed a decrease in cortisol levels, and that there was no significant difference in stress reduction between seasoned and new creators. As stated by researchers G Kaimal, their findings were not surprising because “that’s the core idea in art therapy: Everyone is creative and can be expressive in the visual arts when working in a supportive setting.”

If you have depression, then you may be undertaking one or more types of therapy. There are many complementary activities to choose from – including yoga, Tai chi, meditation, and art therapy. The latter has been found to be effective with even severe depression, and the good news is that it is beneficial to experienced artists and absolute beginners alike.