How I Predicted the Twist Ending of 13 Reasons Why 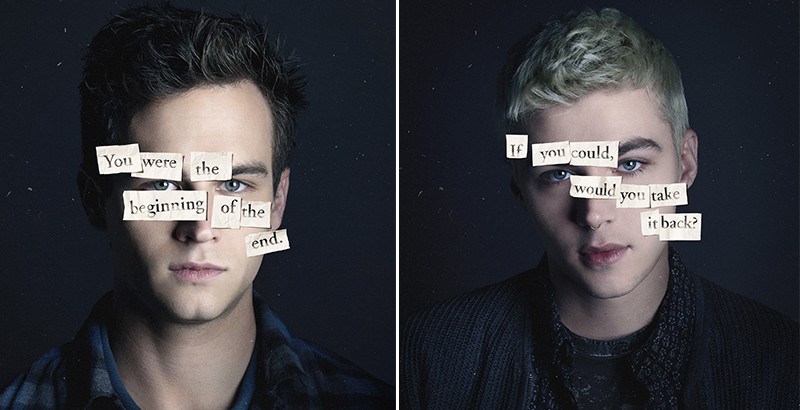 It’s another week of Mental Health month, and we’re continuing our series of blogs about the Netflix show 13 Reasons Why.

To reiterate, if you have not seen the trending Netflix series, please note: 13 Reasons Why is a massively triggering show, especially for those who are struggling. Please do not watch this show unless you are at a safe and stable place in your life, as the images and themes depicted are graphic. Several of our volunteers are still processing the show because of the weight of the material. If there is any doubt about your personal ability to watch the show, don’t do it.

This week, our President, Katie, discusses how she predicted the “twist ending” of 13 Reasons Why.  The following contains major spoilers, and lots of them.

I watched 13 Reasons Why in the span of 3 sittings.  When it came to the final episodes, I kept watching until the minute I had to leave to teach college that afternoon.  I almost cried on the bus on my way.  Then I sat in my office with my headphones on and finished the final episode.

After I finished the series, I listened to a podcast that I love, Still Buffering, which is hosted by 3 sisters who are separated in age by several years.  They usually talk about their different teenage experiences and what millennial teenagers are into these days.  They took an entire hour-long episode to discuss 13 Reasons Why.  They talked about how shocked they were at the twist ending (here comes the spoilers) when we hear that Alex is in the hospital with a gun wound to the head, and we assume he attempted suicide.  They said that they were so engrossed in Hannah’s story, they didn’t even notice the clear signs Alex showed throughout the series.

I was surprised at how shocked they were.  I spent the entire series with my heart open and worrying about the students at the center of the show.  I watched many of them display signs of depression, anxiety, drug abuse, and PTSD.  I worried about several of them considering suicide themselves.  But most clearly, I saw the signs of suicide in Alex’s character.  Here I’ll explain the 7 reasons how I predicted he would make an attempt.

Reason #1: I know the statistics

Reason #2: He knew someone who died by suicide

Alex, like the other teens on the show, knew someone who had died by suicide: Hannah.  Although this is not a guarantee, knowing someone who died by suicide makes you more likely to consider it – to an extent.  A death of any sort for teens has been shown to have profound impact, especially when that death is by suicide.  This is partially why many people are hesitant to discuss suicide with teens; they fear copycat suicides or suicide contagion.  However, when we talk about suicide responsibly, we can actually bring awareness and save lives. Unfortunately, the fact that Alex not only knew Hannah but was at one point a close friend of hers increased the risk that he would consider suicide himself.

Reason #3: He really blamed himself

Out of all of the teens on the tapes, Alex took on the burden of his blame the most.  Toward the end when they discussed how none of them are actually to blame for Hannah’s suicide, Alex argued that they actually were to blame.  And they should’ve already known that.  Throughout the series, I saw him take on more and more of the burden and shame of what he did.

Feeling self-loathing or self-hatred, like Alex did in the show, is a red flag that someone could be considering suicide.  Guilt and shame are powerful emotions, and Hannah’s tapes made each of these teens feel these emotions about what they did.  I saw that Alex most clearly blamed himself for what happened to Hannah, showing that he felt guilt and shame about what he did.

Reason #4: He was increasingly reckless in his behavior

I started to worry about Alex when he put his foot down on the gas pedal and didn’t let off when his “friends” told him that Clay had gotten the message.  In that scene, I saw determination in his eyes, like he was daring another car to come at him with his lights off and speeding over 100 mph.  He finally pressed the brake when his dad, the cop, pulled him over.  That brief flash of determination was only a warning of more to come.  Later, I saw Alex pick a fight with one of the top athletes in school, and he seemed to know he wouldn’t win.  Increasingly reckless or self-destructive behavior like this is another red flag that someone might be considering suicide.

As a rule of thumb, young men tend to show depression or hurt through anger and aggression instead of sadness.  Alex shows this when he started getting into fights and yelling at some of the other teens, including his friends.  In one scene, we even saw him angrily tear down the suicide prevention posters at school.  He then yelled at Clay, “Why don’t they put up a poster that says try not being a dick to people?”  Depression is a mental illness that can lead to thinking about suicide, so it is important to keep an eye out for angry or aggressive moods, in both young men and women.

Reason #6: He made an attempt earlier in the show

Remember that scene when they’re all at Bryce’s house and Alex started to regret his part of the tapes?  He stood by the pool, and suddenly just fell in, sinking deeper and deeper.  He tried to drown himself.  As his body started struggling for air, he surfaced.  Maybe we’re supposed to think that he felt like he was metaphorically drowning in regret and shame.  But as I watched it, I hid behind my blanket, afraid about whether or not he would come up for air again.

There was also a clear parallel with this pool scene and the way Hannah took her life in her bathtub. At the time of Alex’s scene, we don’t yet know the method that Hannah used to take her life, but when we find out later in the show, I realized that the show drew this direct parallel to hint at what was to come.

Reason #7: He suddenly became happier at the end

This is perhaps the scariest sign of suicide for any parent, teacher, or friend.  In the last scene that we see Alex, he’s cleaned up his room.  Alex’s dad commented on how he was proud of him.  He seemed to be turning a new leaf.  We might assume that, like Hannah, he was trying to get a “fresh start.”  He wasn’t.  This was another direct parallel to Hannah’s death.  She also cleaned up her room and put everything in its proper place before taking her life.

When someone who shows other signs of suicide suddenly seems happier, more carefree, or quickly turns around in other ways, this is dangerous.  When Alex made this sudden shift in the show, I knew that he wasn’t suddenly better (although I really hoped he was).  Instead, when someone makes this sudden shift, it’s more likely that they’ve made a plan to end their pain and end their life.  They suddenly appear happier because they know they won’t be around anymore, they won’t feel more pain or cause more pain for others.

If you were surprised by Alex’s apparent suicide attempt at the end of the season, I encourage you to take a look back on the behavior that Alex showed throughout the season.  Most of the teens involved in the tapes Hannah leaves behind show signs of depression, anxiety, drug abuse, PTSD, and/or suicidal ideation, just like Alex.  In fact, 90% of people who die by suicide show warning signs, like the ones I discussed here, but often they go unrecognized.  This twist ending of 13 Reasons Why demonstrated exactly how subtle or ignored these signs may be.

If you notice some of these signs in your teen, your student, or your friend, we suggest you ask them if they’ve considered suicide and then get them the help they need right away.

If you’re hurting in any way, please reach out for help:

Call 1-800-273-8255 (TALK) or 1-800-SUICIDE for the National Suicide Prevention Lifeline
Send a text to 741-741 for the National Crisis Text Line
Chat online at www.ImAlive.org or www.CrisisChat.org
Or talk to any trusted adult; a parent, teacher, counselor, or local support group

13 Reasons Why: What Viewers Should Consider

Church discussion guide for 13 Reasons Why